A power law is simply a function where one variable varies as a power of another.

Examples of power laws include:

Why is it important:

Mathematically, a power law can be represented simply as a function such as Y = X^Z.

If x is a decimal and its exponent is a positive integer we get a decreasing curve that looks like: 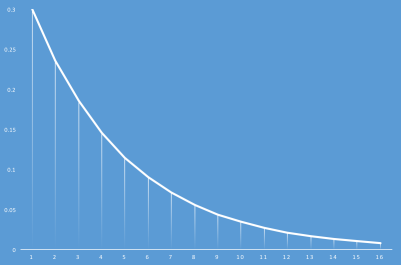 If x is an integer and it’s exponent is a positive integer we get an increasing curve that looks like:

The power law is in direct contrast to the normal, or gaussian, distribution which looks like: 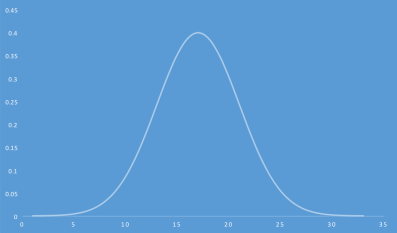 The Gaussian (also known as normal) distribution assumes the entire population is distributed across with a huge majority of values close to the average.

Gaussian distributions are observable in situations where there are finite limits. For example, if you were to plot the height of every adult in the world, it tends to resemble a normal distribution.

Power Law distributions are observables in situations suitable to wild randomness. Wild randomness occurs in environments where a single observation can severely impact the total. A common example is a swing in the stock market such as Black Monday, when the Dow Jones lost almost 22% in a single day, or the wealth distribution where 1% of people account for 50% of the world’s wealth.

While the Gaussian world treats extreme events as highly unlikely outliers the Power Law world recognizes that a few events have a disproportionate impact and account for most of the end result. In a Gaussian world, extreme events can be safely ignored as the tails of distributions are inexorably small.

In the Power Law world, extreme events completely change the game as they can occur in an unprecedented scale. Most of our models have to be thrown out of the window as the analytical tools we have developed are designed to understand a Gaussian world. Forecasts become less meaningful and are hardly predictive (in fact, they are harmful!).

A lot of our institutions (businesses, governments, organizations) operate in a power law world, but pretend they are in a Gaussian world because it is more simple to model and understand. This is clearly a mistake.

The effects of shifting mindset if you are operating in a power-law world are enormous.

For one, we can throw all of our Gaussian (normal distribution) models in the trash including those we use when measuring risk, returns, and probabilities. Though it is only human to prefer the predictable over the unpredictable, process over instability, certainty over ambiguity, the Power Law world requires that we think differently and embrace the outcome of unlikely, yet extremely powerful, events. In a power-law world, a small change alters the slope of impact resulting in large changes in outcomes similar to a Butterfly Effect.

In a power-law world, a small change alters the slope of impact resulting in large changes in outcomes similar to a Butterfly Effect.

In venture capital, for example, a disproportionate amount of returns are concentrated in very few winners. That being the case, it is preferable to invest in startups that could either lose/win big than in startups that you know will only return a meager amount. This effect is not only true in venture capital, but in all industries susceptible to ‘superstar effects’ such as sports, music, actors, movies, politics, and many, many others. In fact, I would venture to say that the Power Law is much more prominent than we think or give it credit for.

In our personal lives we are constantly faced with Power Laws. A few common examples include our investments in time, money, effort, and relationships. Think about the small number of purchases that really impact your life — your favorite article of clothing, an awesome mattress, your smartphone, etc…; a few experiences have probably impacted your life and made more a difference than all the others combined; you probably derive more value from a few relationships (your family, closest friends) than from all others combined.

In most cases, it is incredibly hard to predict with any level of accuracy which activities will generate outsized returns so it is extremely important to focus on those that you can.